Iyengar is a form of Hatha Yoga which emphasizes detail, precision, and alignment in the performance of posture (asana) and breath control (pranayama). Development of strength, mobility, and stability is gained through the asanas. 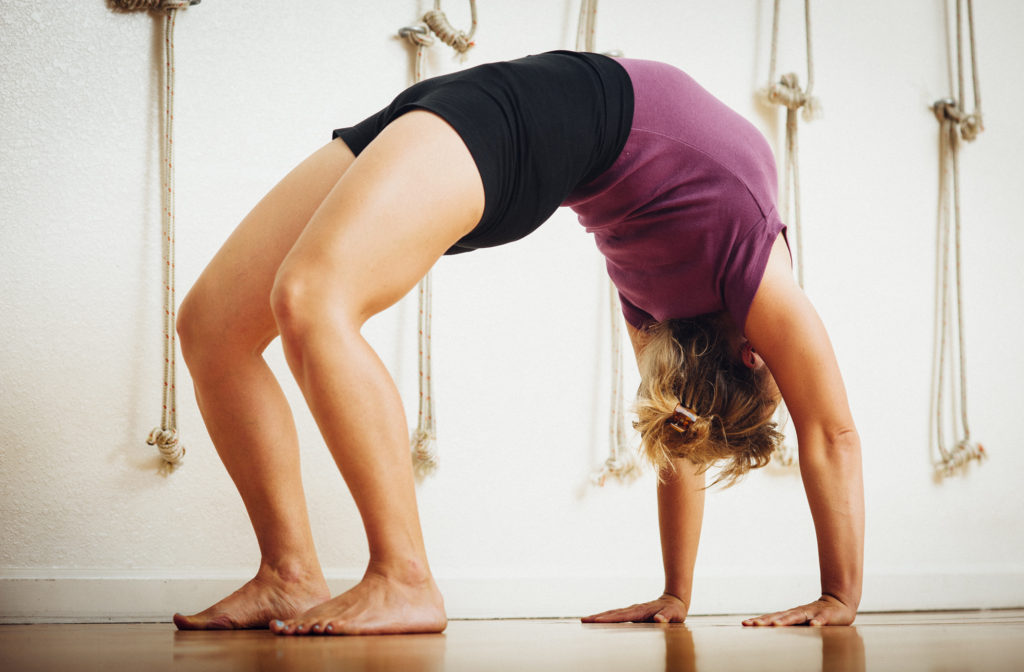 What is Iyengar Yoga?

The Iyengar yoga technique emphasizes precision and alignment, and quality of movement is prioritized over quantity. You learn to move with ease in your body while working within your limitations. This makes the yoga postures (asanas) safe to perform. Yoga props such as blankets, blocks, and belts may be used to improve your understanding of poses or to help if you have difficulties. One would be surprised to know that a simple kitchen counter can be used to perform challenging standing poses, or a corner of two walls to help establish proper alignment and stability. These everyday items in our lives can be used to unbind our bodies and help free the mental strains we experience every day.

Who is BKS Iyengar?

BKS Iyengar was a pioneer for yoga in the West. He developed a systematic approach to learning how to perform and practice asanas (postures). He is perhaps best known for his seminal book Light on Yoga, which can be found on the bookshelf of almost every serious yoga student and teacher, regardless of whether they are a student of Iyengar Yoga. It is a true modern classic of postural yoga. His subsequent books, such as Light on Pranayama, Light on the Yoga Sutras of Patanjali, and Light on Life continue to illuminate the path of yoga, providing students with invaluable knowledge as they find their way through the challenging landscape of a lifelong practice.

Bellur Krishnamachar Sundararaja (BKS) Iyengar was born on December 14, 1918. BKS Iyengar was a victim of malaria, typhoid, and tuberculosis in his childhood.

At the age of 16, he was introduced to yoga by his guru Sri T. Krishnamacharya. At the age of 18, he was sent to Pune, Maharashtra by his guru to teach yoga. Guruji was a sincere and committed practitioner. His own practice helped him to explore and achieve perfection in yoga asanas. This is reflected in his teachings over many years.

Over the decades of BKS’s practice and teaching, he developed numerous ways to incorporate props for the body to help assist one in the practice of particular asanas. The props allow one to focus on proper alignment, making most asanas accessible to almost anyone. Props increase one’s capacity to maintain that proper alignment, bring greater peace in the body, and–as a result–in the mind. As BKS Iyengar came to the end of his life, still practicing asanas with many supports for long periods of time, he devoted his practice so that every practitioner of Iyengar yoga would benefit from his efforts and revolutionary approach to asanas and pranayamas. He is quoted as saying: “Let my end be your beginning.” BKS Iyengar passed away on August 20, 2014, at the age of 95.

BKS Iyengar taught alongside his daughter Geeta and son Prashant. Geeta and Prashant run the Ramamani Iyengar Yoga Institue in Pune, India. BKS Iyengar also closely taught his granddaughter Abhijata for the last 14 years of his life. At the age of 32, Abhijata is a clear conduit and force all her own for relaying the teachings of Iyengar Yoga.

Sign up to receive Anneke's series and workshop schedule in your inbox.